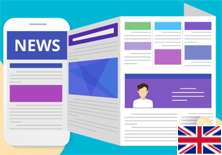 IMF cuts China’s GDP outlook on coronavirus risks The International Monetary Fund (IMF) slashed China’s 2020 growth outlook to 5.6% from 6.0%. According to IMF Managing Director Kristalina Georgieva, the Covid-19 epidemic could slow global growth by 0.1 pp this year. “In January, we projected global growth to strengthen from 2.9% last year to 3.3% this year. Since then, Covid-19 − a global health emergency − has disrupted activity in China.” Meanwhile, Georgieva said the “uncertainties are too great to permit reliable forecasting.” “Many scenarios can play out, depending on how quickly the virus is contained and how fast the Chinese and other affected economies return to normal,” she added. According to the IMF’s base case scenario, China’s economy would return to normal in Q2 2020. As a result, the impact on the world economy would be relatively minor and short-lived. “In this scenario, 2020 growth for China would be 5.6%. This is 0.4 pps lower than the January WEO Update. Global growth would be about 0.1 pp lower,” the IMF Managing Director said. “But we are also looking at more dire scenarios where the spread of the virus continues for longer and more globally, and the growth consequences are more protracted.” According to Georgieva, the coronavirus outbreak is a serious reminder that an unexpected event may pose a threat to recovery, which is still fragile. She called on policymakers to work together to decrease uncertainties related to trade, climate change and inequality.

US consumer confidence slightly improves in February The US Consumer Confidence Index improved from 130.4 in January to 130.7 in February, research firm The Conference Board reported. The gauge measuring how American consumers assess the present financial conditions dropped from January’s 173.9 to 165.1, the lowest since June 2019, while the Expectations Index for the next six months jumped from 101.4 to 107.8. “Consumer confidence improved slightly in February, following an increase in January,” said Lynn Franco, Senior Director of Economic Indicators. “Despite the decline in the Present Situation Index, consumers continue to view current conditions quite favorably. Consumers’ short-term expectations improved, and when coupled with solid employment growth, should be enough to continue to support spending and economic growth in the near term.”

The investment community is still concerned about the spread of the coronavirus outside China and the threat of negative economic consequences of the outbreak globally.

At the start of the session, US equities attempted to rebound after a heavy selloff that pummeled markets in the previous session, but the picture looked grim by the close. A warning by the U.S. Centers for Disease Control and Prevention about the pace of the coronavirus outbreak urged investors to ditch risky assets.

Yesterday’s macro had little effect on trading, with the February CCI coming in at 130.7 vs. 132 projected.

The external news flow for US trading was unfavorable as European and Asian equities closed in the red.

In the blue-chip segment, all liquid names saw red ink, with the likes of Visa, UnitedHealth, JPMorgan, and Boeing pulling back over 4%.

On the other side of the ledger, shares of Macy’s plunged 5.5%, although the retailer’s financials beat the median consensus.

Mastercard shares tumbled 6.7% as the payment system operator warned about the negative effect of the coronavirus outbreak.

The daily chart shows that the index broke out of a rising wedge while downside potential persists in the short term.

Key European stock induces traded resolutely to the downside on Tuesday, February 25 amid persisting worries about the escalating coronavirus outbreak. Notably, the recent upsurge in the number of cases outside China exacerbated investor concerns that the epidemic could be a significant drag on global growth.

Bucking the trend, French chemical company Arkema soared 6.4% on media reports that it is mulling an asset sale.
Major European bourses have been in decline during the first half of trading on Wednesday, February 26 amid persisting concerns about the coronavirus outbreak as companies across the globe come out with downbeat earnings guidance. Moreover, traders are focused on incoming earnings releases.

On the daily chart, the German DAX has broken through the lower line of Bollinger bands, while the Slow Stochastic Oscillator and the RSI have approached oversold territory. As a result, an upturn could be in the offing.

Asian stock indices turned in mostly negative performance on Wednesday, February 26, taking their cue from another sell-off in US equities. Regional markets remain under pressure from uncertainty related to the potential impact of the coronavirus outbreak on global growth.

The S&P/ASX 200 standout advancers included Healius Limited and Invocare, which spiked 15.22% and 13.57%, respectively. On the other side of the spectrum, Polynovo and Appen Limited tanked 20.53% and 10.35%, respectively.

Advertising firm Dentsu pulled back 1.8% on the heels of concerns that the Tokyo Summer Olympics might be canceled.

In Hong Kong, technology names took a pummeling, with Sunny Optical and AAC Technologies sliding over 3%.

Medical center operator Healius bolted up 16.3% on news that private equity fund Partners Group made a USD 1.4 bn bid to take over the company.

In technical terms, the Hang Seng Index is still trading slightly below the lower bound of a rising band.

Oil prices continue to trade lower on Wednesday after taking a hit yesterday on signs that the coronavirus is spreading quickly. According to media reports, confirmed cases in the world, except mainland China, reached 2,903, up 465 over the past 24 hours. Most cases were confirmed in South Korea, Japan and Italy. In other words, the epidemic has exceeded the borders of China, and this could imply more serious than expected consequences for the global economy. Meanwhile, OPEC+ is still in no hurry to take additional measures to support the oil market. Saudi Arabian energy minister Prince Abdulaziz bin Salman claimed yesterday that the cartel and its allies have not yet decided whether to extend or modify the deal in light of coronavirus developments.

Meanwhile, Bank of America analysts noted in an overview that the spread of the novel virus and a global economic slowing pose a risk to crude demand. However, these risks will be offset by geopolitical uncertainty and strict budget discipline of US shale oil producers. BofA forecasts Brent to average USD 62/bbl in 2020.

Non-ferrous metals have moved lower on the LME, while gold stabilized within a narrow range of USD 1,640-1,650/oz.

Gold is trading within an upward band with the lower libe near USD 1,600/oz, while the upper line is pushing towards USD 1,695/oz. Notably, a rebound towards USD 1,700/oz is expected in the short term.